Since 1980, Mt. Airy CDC — incorporated as the Mt. Airy Village Development Corporation, later Mt. Airy USA, and since 2019, Mt. Airy CDC — has existed to serve the Mt. Airy community. We are a nonprofit community development corporation, after all. Our services include award-winning housing counseling, initiatives to support children’s literacy and local seniors, and community events like Supper Sessions and Go Mt. Airy Markets. But it’s our Business Services division that’s been there the longest, right back to our inception.

By 1980, West Mt. Airy Neighbors (WMAN) had over 20 years under their belt, bringing neighbors together to fight blockbusting and redlining to create an intentionally integrated community and improve quality of life. East Mt. Airy Neighbors (EMAN) was approaching 15 years of the same. But while Mt. Airy’s residential components fought to remain stable, the commercial corridor where they came together lagged behind with empty and blighted buildings.

As they’ve done so many times, WMAN and EMAN teamed up to find a solution. In July 1980, members from both organizations voted to incorporate the Mt. Airy Village Development Corporation to focus efforts on revitalizing “downtown Mt. Airy” — the blocks of Germantown Avenue between Mt. Pleasant Avenue and Allens Lane. Specifically, the new nonprofit was formed to purchase and renovate what was then known as the “Big Brothers Building” — 7125 Germantown Avenue, now home to The Juice Room.

By 1986, the organization’s revitalization efforts had expanded to the length of the corridor in Mt. Airy, and we purchased the former post office at 6700 Germantown Avenue (corner of Westview Street). Redeveloped as Mt. Airy Center, the building originally hosted offices for WMAN, Mt. Airy Learning Tree, and rentable commercial offices. That building now houses Work Mt. Airy, our coworking space which opened in 2016 and doubles as the host site for PhillyiHub, our business training program whose opening Mayor Jim Kenney attended.

Down the block on the corner of East Phil Ellena Street, the Wagon Wheel drew a reputation as a nuisance bar, and the community turned to our organization for help. After a high speed chase resulted in a police car crashing through the building, the organization purchased the property, demolished the old building, and constructed Phebe Commons as a new commercial property. Opened in 1999, it is home to Philadelphia Federal Credit Union, Miss Kim’s Mt. Airy Breakfast & Lunch, and the 19119 post office. Our offices are still upstairs.

In 2006, the organization refocused its efforts on the corridor, launching The Avenue Project, which featured a number of initiatives like Rock the Blocks to improve storefronts and landscape. The $3.5 million project brought new façades to a number of businesses and improved the pedestrian experience along Germantown Avenue with new sidewalks, trees, planters, benches, and more.

The following year, this work took on a more permanent role when the organization led the campaign to create the Mt. Airy Business Improvement District (Mt. Airy BID), which was authorized in 2007 and reauthorized in 2017. The BID “cleans and greens” the Avenue from Washington Lane to Cresheim Valley Drive, and in 2019, it installed five pocket parks with Little Free Libraries in former dead zones.

In 2011, the Go Mt. Airy promotional initiative was launched as a way of celebrating the local business association, which the organization has managed through a number of incarnations, including the current Go Mt. Airy Business Association. The @gomtairy social media channels have proven successful, with over 20,000 followers between Facebook, Instagram, Twitter, and the monthly Go Mt. Airy newsletter. The organization also partnered with the Mt. Airy BID to install the Go Mt. Airy banners along the Avenue, which will soon be replaced by new versions.

Over the past decade under the Go Mt. Airy banner(s), we’ve hosted Night Market, which became Street Fare, which evolved into Supper Sessions; we’ve created the Autumn on the Avenue family Halloween event; and we’ve launched Go Mt. Airy Markets, a multimedia event at Lovett Park, which Mt. Airy CDC renovated as part of the Reimagining the Civic Commons initiative. And last year, we hosted our first ever Business Expo.

And so to 2020. While we’re proud of what we’ve accomplished these past four decades, we’re looking ahead at what’s still to come, including our work with the local business community. Over the course of this year, we’ll share blog posts that profile local businesses, tell local stories, and celebrate this great community that is our reason for being. It’s our 40th anniversary – come along for the ride! 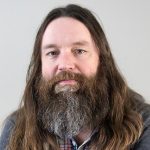 Brad brings a background in journalism to his position handling communications for Mt. Airy CDC—and a four-block commute from his home in the neighborhood.